The centre of the campaign is the independent city of Clare. Clare lies where the Fulcrum Mountains meet the Western Sea, which makes it an important gateway between the north and the south of the known world.

To the north are the Venucci Republics, a nation of independent city states that live off trading and farming in their temperate climes. To the south are the Austral Enclaves, a nation of fortress-like citadels designed to withstand the harsh conditions and cold climate of the southern wastes, who live off their plentiful mineral wealth. 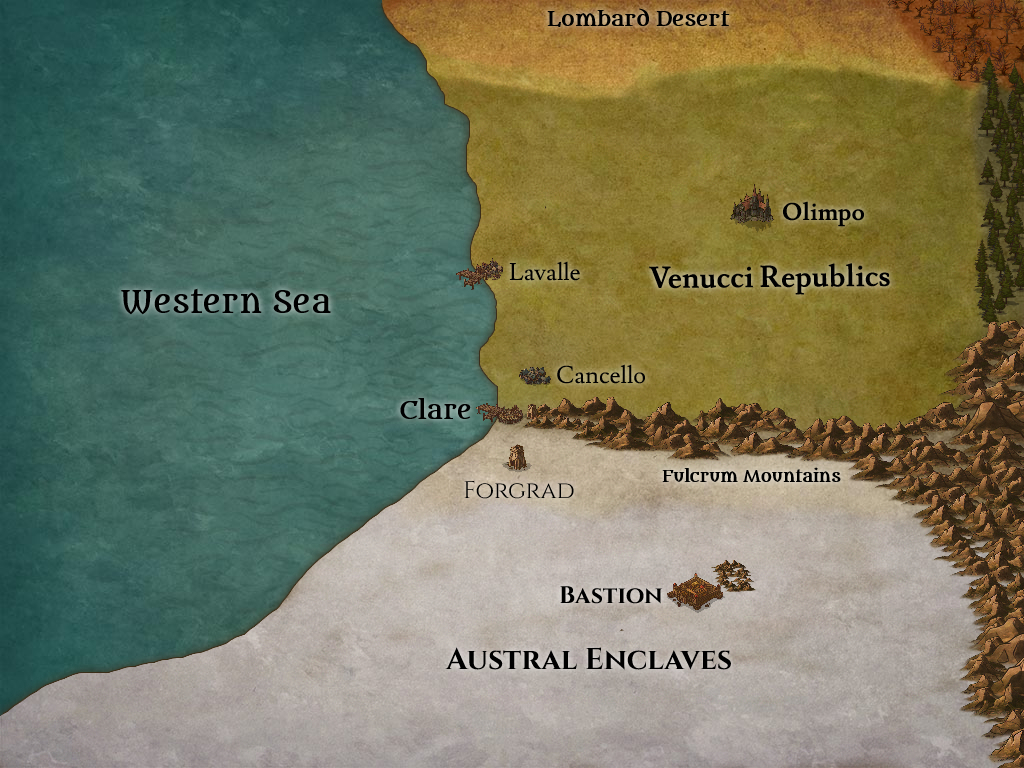 Not to scale. Only nearby and major features shown.

The inhabitants of Clare have absorbed much of the culture of both the Venucci and Enclaves, and different parts of the city exhibit features of each. Due to the tensions between the two cultures, most parts and inhabitants of the city show a notable preference for one culture over the other in dress and customs, providing stark contrasts. Citizens of Clare choose names following the conventions of the culture with which they identify.

The city itself is a reasonably law-abiding place, but the surrounding environs are not particularly well policed. The same hills and mountains that make the city defensible also make good hiding places for bandits, making keeping them under control difficult. While violence is rare in the city, crimes such as theft and burglary are still common. As a major transit route, the city makes a lot of money from taxing trade, so smuggling is a major criminal enterprise.

Clare and both cultures have a relatively modern attitude to relationships, gender and sexuality.

Clare was the northernmost satellite of the Enclaves, but due to its relatively temperate climes, conservative Enclave culture chafed. It was heavily traded with and invested in by the Venucci, and encouraged to break away and assert independence, which it did roughly 40 years ago. Clare was expected to join the Republics, but rejected membership in favour of neutrality, and has followed a policy of playing both sides to its advantage. Due to the importance of Clare as a strategic location, both powers have guaranteed the independence of Clare should the other try to take it by force, so it acts as a buffer between the two larger nations.

Clare is ruled over by a council of representatives from the influential groups in the city. The most powerful political groups in the city are the Houses and Cabals, which in practice are similar structures, and which they're named depends on which culture they consider themselves modeled on. There are also other organisations and factions that have the potential to help or hinder the task force.

The Watch enforce the law in Clare, though the task force has been given a rather unique legal position due to its unusual nature.

Houses and Cabals can have any internal structure they like, and may have internal titles. The only formal political title in Clare is Councillor, who is a person on the Clare ruling Council. Most politicking in the city is based around currying favour with Councillors and obtaining and retaining Council seats. There are few Council positions, and aspiring to become a Councillor personally is a great undertaking. Council seats are awarded to groups, and the Councillors for those seats decided upon internally by the group. Addition or reassignment of a Council seat is very rare and is only done to acknowledge a significant power shift in the city.

The Task Force Headquarters
A sturdily built lab formerly used by House de Lumiere to test its more volatile experiments. They abandoned the facility when it became too expensive to maintain for the benefit. The Council resurrected it as a venue for the task force.

Watch Academy
The central building of the Watch. This is where the Watch, Magistrates and much of the Militia are based.

Docks
The docks district deals with the trade that goes up the coast towards Lavalle. The occasional foolhardy explorer can be found here with dreams of setting out across the Western Sea, but few of those are ever seen a second time.

The Town Walls
As befits a city that was a former enclave, Clare has strong town walls. Strong bulwarks are a traditional fixture of any Enclave to provide protection against the predators and storms of the southern wastes, but in Clare they were more designed to ensure the security of the city against potential Venucci raiders and invaders. Since the secession they've mostly served to control trade traffic through the city to ensure the valuable tariffs are collected. There are two main gates in the city; Northgate stands on the road to Cancello and Southgate guards the road to Forgrad.

Fort Tillsyn
The largest of the forts in the lowlands of the Fulcrum Mountains near Clare, outside the walls. It usually has a skeleton garrison, but also serves as a training ground for Watch and Militia members.